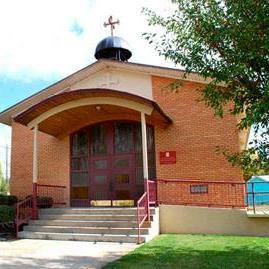 The church on Green Street has recently celebrated it's 60th year in beautiful Craig, Colorado.

The following is a “condensed” version of the events that lead to the foundation of St. John the Baptist Greek Orthodox Church in Craig, CO. The “unabridged” recounting can be located in our 50th Anniversary Book

The early 1900’s saw the first wave of many young Greek men and women to the United States of America seeking a better life. Although many of them possessed only rudimentary skills, they quickly found themselves migratory work across the country.  Eventually, the industrious Greeks found steady work in the coal mines of the Price and Helper, Utah. Greeks who settled into this mountainous region were themselves from similar areas in Greece and were well suited to life in the arid climbs of eastern Utah and northwestern Colorado.

These early immigrants worked hard saved their money and in time established homesteads in the Craig, Colorado area. After which, many of the immigrants returned to Greece to visit family, find brides, and return to their lives in America. Where, with the aid of their brides, they expanded their families and businesses and became respected member of the Craig community.

The conclusion of World War II brought about a second wave of immigration from war torn Greece. And the Greek Community of Craig found itself growing. The burgeoning community’s social and sacramental needs were increasing as well.  In the early 1950’s the Greek-American families of Craig pooled their monies and purchased 8 lots at the corner of 7th and Green to be the future site of a church. In the meantime the local Greek orthodox Community needed to summon clergy from Salt Lake City or Denver to fulfill the sacramental needs of the community: baptisms, weddings, and funerals.

They formed a committee for construction of a church on the purchased land. The committee collected donations and raised the funds through contacts in Meeker, Grand Junction, as well as Price, Helper, and Salt Lake City. A Salt Lake City Businessman who was instrumental in providing discounted building materials for the project also commissioned Salt Lake City Architect, George Nicholettis to design the Craig facility and assist in its construction.

Building of the church began in fall of 1957, but came to a sudden halt with the untimely death of Tony Peroulis. (Peroulis’ family donated the iconostacion to St. John the Baptist in loving memory of Tony.) Construction resumed in spring of 1958 with the setting of the cornerstone of the church, which was completed later the same year with the first Divine Liturgy celebrated by Fr. Diakandrou.